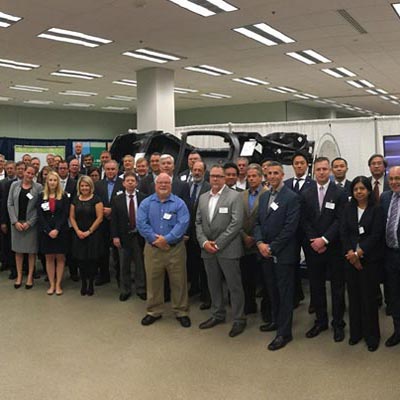 Over the past few years, composites have been gaining traction in the automotive market. In 2016, ACMA and the Automotive Composites Alliance (ACA) took a step to educate hundreds of engineers and designers from a major automotive OEM with an event entitled NO LIMITS Composites.

Keith Bihary, an ACA member who serves as the Corporate Sales Director for Molded Fiber Glass, says the event lived up to its name by showing that composites can be used for more parts of a car than people think. The displays included a variety of applications, including suspension components, Class A body panels, structural components, electric vehicle battery covers, and front end modules.

“For the industry, we got to show off the fact that composites can be used for more than just a bumper or more than just a hood,” Bihary said. “There’s a lot of parts on each individual car that are potential candidates [for composites]. What it did was open everyone’s mind to what the options are.”

For ACA members, NO LIMITS was a chance to connect with staff at an OEM they would normally not have access to. During the event, ACA members heard first-hand what the OEM is looking for, what their problems are, what their needs are, and how they can guide their future product development or even the way they approach the automotive industry.

“I would venture to say each [ACA] participant must have had three dozen meaningful conversations,” said Terry O’Donovan, ACA Chairman and Vice President of Marketing and Sales at Core Molding Technologies, Inc.

While the event was an opportunity for ACA members to display products, answer questions and make connections, it also posed a challenge. Members of the ACA that are normally competitors would have to speak with one voice as an industry. O’Donovan says the ACA unified through a combination of consistent messages and multimedia platforms.

“As the participants would go from display to display, they saw similar kinds of content, a similar appearance identifying the products that were there,” O’Donovan said. “We had each [ACA participant] contribute to some video content, which was then skillfully edited into one industry video. The existence of a companion micro-website also helped give that industry presence.”

The website featured the video as well as links to a history of automotive composites and webinars event participants could access. It also helped give the composites industry a footprint that extends beyond the event and can now be used as a reference point for the OEM’s designers and engineers.

Later this year, the ACA will hold another NO LIMITS event at the R&D center of one of the “Big 3” automotive OEMs in Detroit. This year’s event promises to be even bigger than last year. More info will be available soon in ACMA’s Insider eNewsletter.

Want to Know More About CGI?

Lend your voice and expertise to our Composites Growth Initiative (CGI) committees.