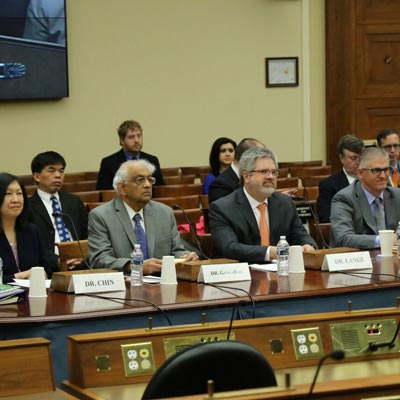 For years, a lack of design codes and standards has been a major barrier to increased adoption of composites in infrastructure. Shane Weyant, president and CEO of Creative Pultrusions, Inc., has called the standards gap our industry’s “threshold problem.”

Last year, ACMA took a major step to address that problem during a workshop at the National Institute of Standards and Technology (NIST) that laid the groundwork for a “roadmapping” document that outlines actions that industry, academia and Congress can take to help engineers and designers build more confidently with composites. Some of the needs identified in the report include aggregation, validation and dissemination of existing standards, development of advanced durability testing and performance modeling, increased education and training.

ACMA moved one step closer to overcoming these barriers on April 18 during a congressional hearing on how creating standards for composites can strengthen American infrastructure. The hearing focused on the benefits of composites and explored NIST’s unique ability to aggregate existing standards and design data for composites and validate them for broader dissemination and use.

The message built on during his 2017 testimony before the Energy and Commerce Subcommittee on Digital Commerce and Consumer Protection, during which he explained that composites offer durable, sustainable, and cost-effective solutions in infrastructure applications. In the months following Weyant’s 2017 testimony, North America experienced one of the worst hurricane seasons in recent memory, which further emphasized the urgent need to rebuild the nation’s infrastructure with innovative technology.

“Hurricanes Irma and Maria brought down all but eight utility poles in the [Virgin Islands] – all eight of which were composites,” said Weyant. “Where all other materials failed, composites were left standing.”

The Subcommittee on Research and Technology also heard from Dr. Hota GangaRao, Wadsworth Distinguished Professor at the Statler College of Engineering at ACMA member West Virginia University. Dr. GangaRao believes that instead of having every DOT develop standards independently, national standards would increase the efficiency of the industry and save costs by reducing redundant standards development.

Dr. GangaRao also called on Congress to initiate stringent enforcement of standards through NIST, and to require future government projects to consider composites as alternative designs, including listing composites as approved materials.

“Congress can appropriate nationwide funding for preventative maintenance and repair using FRP composites, which would help save many in-service structures instead of replacing them,” Dr. GangaRao said. “With a dedicated funding stream for repairs only, DOTs and other infrastructure owners can use FRP composites to repair a structure during early stages of deterioration before small cracks become large delaminations.”

For more information, click here to access the hearing page, which includes a video recording and transcripts of each testimony. To learn more about how you can get involved in ACMA’s efforts to pursue federal resources for a composites standards initiative, visit https://acmanet.org/action-center/.

Read about ACMA’s activities to develop and implement legislation, regulation, and policies that benefit our industry.