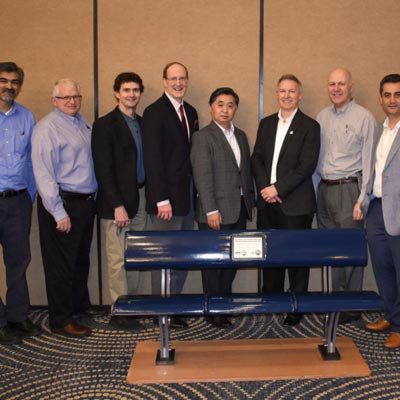 Seven years ago, mainstream composites recycling was considered an aspirational goal but not a commercial reality, according to Dan Coughlin, ACMA’s Vice President of Composites Market Development. While recyclability of end-of-life composite products could make FRP as desirable as metals, it is hard for composite manufacturers to justify recycling without proof that it can be profitable.

When ACMA’s Green Composites Council Recycling Committee was formed in 2011, the industry’s rate of recycling was approximately 1 to 2 percent. At the time, the committee was disseminating knowledge about how to solve the composites industry’s recycling dilemma, but the resources to do so weren’t readily available. That was, until the summer of 2015, when the U.S. Department of Energy (DOE) launched IACMI-The Composites Institute – a $259 million program for manufacturing innovation. Later that year, ACMA and IACMI agreed to collaborate on a wide range of topics, including recycling.

In September 2017, ACMA and IACMI formally announced the beginning of a project to study and test CHZ Technologies’ ThermolyzerTM technology, which recycles all liquids, tars and oils from composite materials and converts them into clean synthetic gases. Over the past few months, the technology has been tested extensively at Forst, Germany, where a wide range of materials, including carbon fiber spar caps and glass/foam/balsa wind blades from GE, mixed glass and carbon fiber scrap from John Deere and more were successfully recovered through Thermolyzer’s unique process.

In order for the composites recycling industry to grow, industry leaders needed a forum that provides a platform for new ideas and inspiration for projects. In March 2018, ACMA held its first ever Composites Recycling Conference in Knoxville, TN, to discuss technology and business developments making an impact in the industry. During the two-day conference, a group of around 90 experts from all over the world gathered to share their knowledge and perspectives regarding sustainability, environmental and economic benefits, standardization, waste reduction, and more.

During the conference, attendees had the opportunity to learn about ACMA’s project with IACMI, as well as many other developments in composites recycling, including an Ashland/IACMI project focused on recycling and reuse of vinyl ester prepreg scrap. Attendees also had a chance to see a prototype of the world’s first park bench made of recycled aerospace grade carbon fiber developed by ACMA member The Composite Recycling Technology Center (CRTC).

Other topics included an update on recycling status and developments in Europe from EuCIA and University of Strathclyde (UK), and recycling from a sustainability perspective from Frank O’Brien-Bernini at Owens Corning. Tim Spahn of Carbon Fiber Recycling, Inc. resented and highlighted the recent announcement of a facility opening in Tazewell, TN that plans to recycle up to 2,000 tons of carbon fiber per year.

Attendees also had the chance to tour some of the facilities in Knoxville that are at the forefront of composites recycling innovation, including IACMI’s Fibers and Composites Manufacturing Facility (FCMF) at the University of Tennessee, Oak Ridge National Laboratory’s Manufacturing Demonstration Facility (ORNL MDF) and 3-D printing trailblazer Local Motors.

To learn more about ACMA’s recycling efforts and how you can get involved, contact Dan Coughlin.

Find out about ACMA events where you can learn, network and connect with peers, potential customers and partners.